By Wes Boyer and Samuel Stoddard
Tired of losing arguments? Tired of being outmaneuvered by superior
debaters? You don't have to be! This tutorial will teach you everything you
need to know about being persuasive and winning arguments. Take the principles
in this tutorial to heart, and you'll be able to convince anyone to believe
anything. Even the resolve of the most stubborn of opponents will crumble
before you.

Persuasion is the act of getting a sentient being other than yourself to
adopt a particular belief or pursue a particular action. This tutorial will
teach you how to excel at doing just that. Our examples will assume
a variety of different specific circumstances, but the principles we present
will be applicable in a myriad of situations. Whether you're trying
to persuade a pseudo-intellectual that his political beliefs are, in fact,
as savory as unwashed socks, or whether you're trying to persuade a vicious
dog to please kindly release your coccyx, the techniques of persuasion you
must employ are fundamentally the same.

To be persuasive, you must make use of a number of different tactics. The
more you can utilize in conjunction with each other, the more persuasive
your argument will be. We will start by isolating and identifying each of the
different techniques, and then we'll show how they can be used together in
a single compelling argument.

As debating is primarily a verbal undertaking, most of the techniques you
will need are verbal in nature. We'll start with those, then look at how you
can polish off your style with other types of techniques.

The cornerstone of good persuasive arguing is stubbornness. You must never,
under any circumstances, concede that your opponent might ever possibly be
right. Openmindedness has led to the downfall of many great debaters. If you
find yourself doubting the correctness of your position, don't let it show.
Repeat to yourself, "I am right. I am right." If you can't convince yourself
that you're right, you'll never convince others that they're wrong. Here is
an example of the use of stubbornness in a debate:

Compromise would seem to be prohibited by the previous tip about stubbornness,
but it's not, because you should only use compromise as a diversionary
tactic. Don't ever compromise your main point. But if you introduce points
you don't even care about, then compromise on them later, you can often
trick your opponent into conceding. For example:

Use of big words is persuasive several times over. They make you look all
smart and other people look all stupid; hence, your argument becomes the more
compelling. Furthermore, use of big words means you'll talk longer, and
usually whoever talks the most is the most convincing. "Wow, look at all
he has to say about this," people will say to themselves as they observe you
making a protracted argument. "He must know a lot about this subject."

By way of example, compare the persuasiveness of the following two
statements:

Forgetfulness is a powerful debating tool. You must use this tool wisely,
because it can be a devastating weapon in your fight against ignorance. Here
is what you should do: in the middle of your argument, forget what you're
talking about. This may sound counterproductive, but by forgetting your point
you show the person you're debating with that he is so utterly
wrong, it's not worth the trouble to follow the course of the conversation.
For example:

Talk relentlessly, especially when your opponent is also trying to talk.
Interrupt constantly. If you never give your opposition a chance to give
the other side, you win by default.

Facts might be the best way to substantiate an argument, but lies are the
next best thing. If the facts don't prove your point, make some up.

The big lie is normally the way to go.

No persuasive argument would be complete without a little rhyming. Not only
does it make you sound clever, but, when used correctly, it can make your
opponent sound ignorant. To employ this amazing persuasive tool, you take
one of your opponent's points and make up a nonsensical rhyming word to go
with it. This tactic has no known refutation.

Taunting is a crucial element of a persuasive argument. The purpose of
taunting your opponent is to intimidate him into submission.

The interjection of random comments is a useful diversionary tactic.
Although the best way to win an argument is for your opponents to concede the
debate to you, this last ditch effort can be used in an emergency to secure a
secondary victory by disorienting your opponents so much they don't know how
to proceed. This tactic has the side benefit of presenting yourself as
knowledgeable on a wide range of subjects, so observers are bound to be
impressed by your breadth of expertise.

When in doubt, say "clearly." It may not be clear, but your opposition
doesn't know that. By offhandedly suggesting that a particular train of
thought is obvious to you, you will come across as a daunting force of
intelligence difficult to reckon with.

Above all, you must get the last word. Getting the last word in an argument
is terribly important, because it means everyone listening to the argument --
both those involved and those observing -- will leave with the last word as
the dominant memory of the debate. If you have the last word, that means
your side will be the most remembered. For example:

This certainly looks like an argument you've lost, doesn't it? But consider
how much stronger a case you make for yourself with this slight
modification:

Name calling is an efficient way of pointing out your opponents' weaknesses
and call into question the authority with which they dispute your position.
By encouraging your opponents to doubt their competence, you can undermine
a contrary argument from the inside. For example:

Yelling is one of the most instinctive and exciting methods of getting your
point across. It is also very effective. When you yell, you gain people's
respect and awe. The louder you yell, the more respect you incur. When
yelling, remember three rules:

Witness the following use of the yelling tactic:

Swearing is absolutely crucial if you want to convince someone of something.
Swearing is a sign of great articulation, vocabulary, and bravado. By
swearing, you can demonstrate that you are mature, for you understand mature
concepts, and that you are daring enough to thwart the oppression of social
convention.

Even the most solidly constructed verbal arguments can crumble if your
physical stature is not imposing enough to back it up. Here we will discuss
how you can use body language to support your arguments.

The flailing arms strategy is used to express surprise and to reinforce your
arguments. It's very hard to disagree with someone who waves his arms in
confidence. For example:

Physical stature is an important intimidation tool. Your opponent is more
likely to concede an argument if you appear to be bigger than he is.
Shortness is associated with children, who are dumb, while tallness is
associated with authority figures who know better. Consequently, you should
never debate someone at anything less than eye level. If your opponent is
sitting, stand. If your opponent is standing, stand taller. Wear thick-soled
shoes. Stand on tip-toes. Stand on chairs if you have to.

Another effective gesture you can make that increases the power of your
presence is to make a fist with one hand and ominously punch the open palm
of your other hand.

Here is an example of how physical intimidation can sway the course of a
debate:

Biting is a last ditch effort. You use this tactic when the other person has
been given every opportunity to conform to your opinion and still refuses.
It is normally best to go for an important artery or organ. The jugular vein
is recommended, as it is located roughly at mouth height.

Using These Techniques Together

Here is a sample debate that illustrates each of the techinques given above.
Notice how, when used in conjunction with one another, you can create an
unstoppable argument. 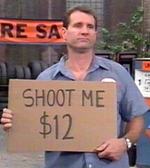